​On Sunday March 8th, Promenader club members, attended the surprise 80th birthday party for Promenader Ruby Shane. The party was held in New Market and hosted by her two daughters.  The photo on the upper right shows Ruby as she enters the room.  The upper middle photo shows members of the Promenaders and other guests.  The photo on the upper left is of the octogenarians (Alex Dommerich, Carl O'Dell, Ruby, and Mary Ann Gearinger) who attended the party.  Carl O'Dell provided the calling for some Mainstream and PLUS square dancing tips. 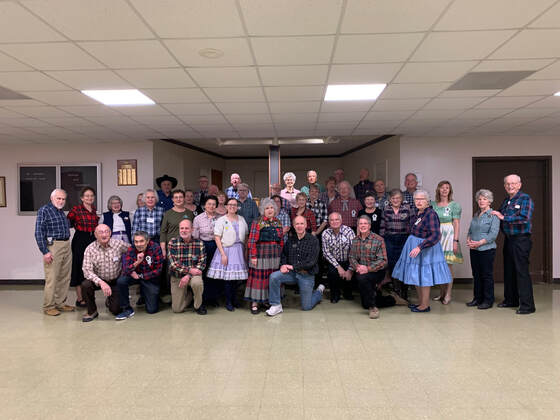 As you can see from the video and photo, it was plaid crazy at the Mad For Plaid dance on Friday March 6th.  Club members and students enjoyed the food and calling of Guest Caller Doren McBroom.

2/25/20 SARAH STAMPER AND HER PRIZED BANNERS 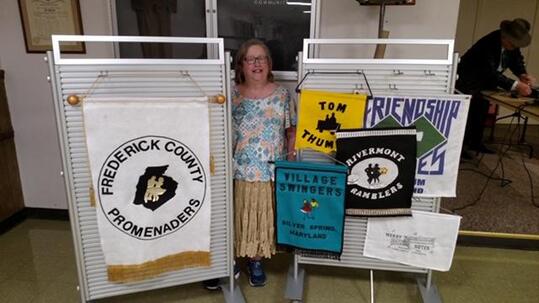 ​Club Banner Steal Coordinator Sarah Stamper stands beside her most recent prized possessions.  They are the result of her continuous successful steals of other clubs banners. Her booty consists of banners from the Tom Thumbs, Friendship Squares, Rivermont Ramblers, Village Swingers, and Merry Notes Square Dance Clubs.  How many more will be added to this collection?  Stay tuned to this website for the answer. 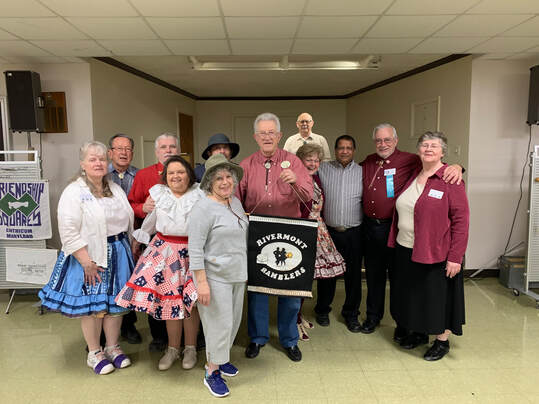 ​It was "Fish" and" Chips" with "all the toppings" on Friday night February 20th at the FCP dance  in Walkersville MD.  The "Fish" being the name of the dance and the "Chips" being the loaded baked potatoes being served.  Five students from the PLUS dance class were part of the eight squares.  As a side event at the dance, the Rivermont  Ramblers Square Dance Club retrieved their previously stolen banner. 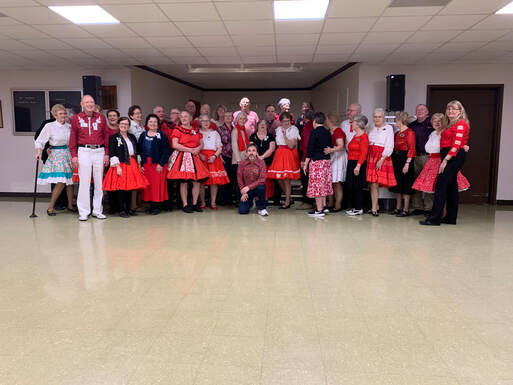 The "Enchantment" was in the air and the red was in the garb at the Some Enchanted Evening Dance on Friday February 7th.  Dance lessons class students were invited to attend this event.  The caller was Mike McIntyre. 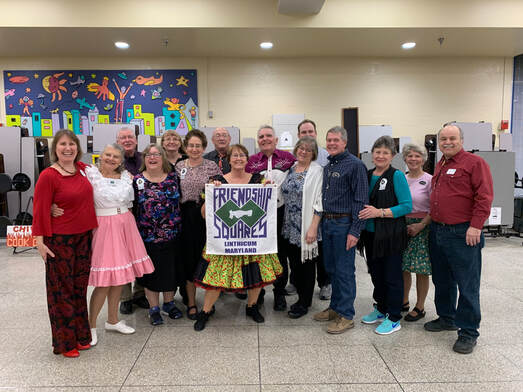 ​On Saturday 02/01 the Promenaders raided the Friendship Squares club dance and stole their prized club banner.  The Promenader Raiders were last seen hightailing it westbound and down along I-70 West. 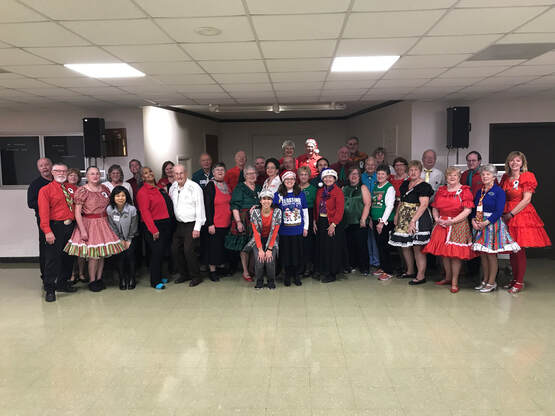 ​The holiday spirit was in full force at the Silver Bells Ring dance with a delicious food spread, great calling and cueing by Mike and Linda, and a festive caroling session at the end.

​The last dance class of 2019 had 8 students and 17 Angels celebrate the holiday season in decorative regalia.  The Webmaster awarded gifts to 3 of the attendees for their efforts.  They were: Rachel Ziegler (Cutest),  Ron Welke (Ugliest), and Helen Roth (Most Creative). 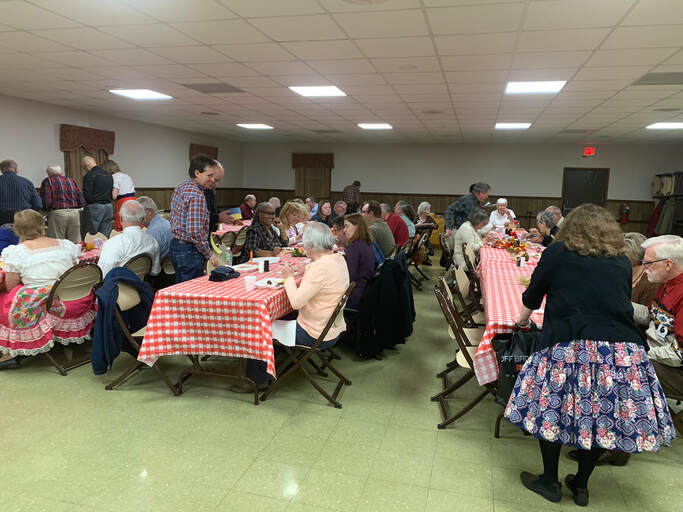 ​Club Members and Guest Visitors enjoyed the scrumptious morsels of food at the pot luck dinner before the We Are Thankful Dance on Friday November 15th.

​The Monday August 26th club fundraiser was a huge success as approximately 40 members and guests enjoyed the food and the camaraderie while helping to raise funds for the club.

Members of the Promenaders and Gad-Abouts attended the 68th National Square Dance Convention in Marietta Georgia on June 26th to June 29th.  The total count for the event was approximately 4100 guests.  The main nightly attraction was in Hall A with the many Guest Callers accompanied by the musical group Ghost Riders to provide a high energy format for square dancing.  The top picture is of the Promenaders and Gad-Abouts that attended the event.  The second picture shows 5 of the 8 members of the contingent from China who wore a dazzling array of square dancing attire.  The Guest Callers were a Who's Who of nationally recognized callers. 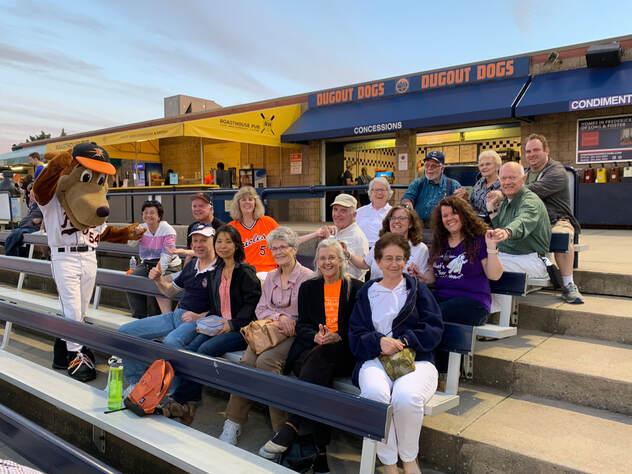 ​On Tuesday June 11th, 16 members of the club attended the Frederick Keys game.  It was a fun social time for all involved especially when Keyote, the Keys Mascot, stopped by for a visit.  Many thanks to Pat Marks for organizing this outing.  Perhaps we can make this an annual event. 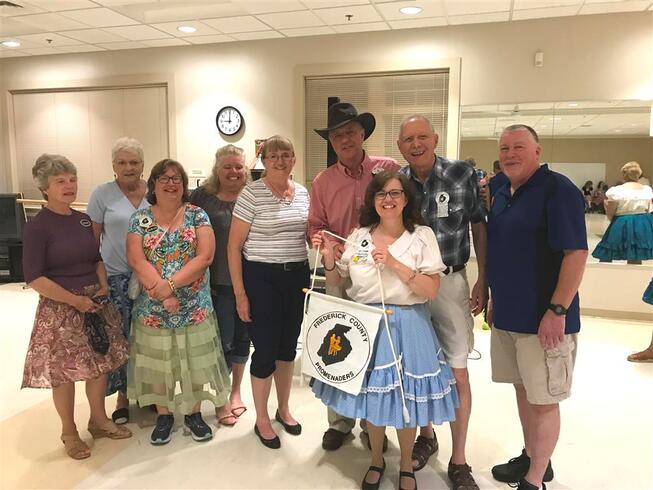 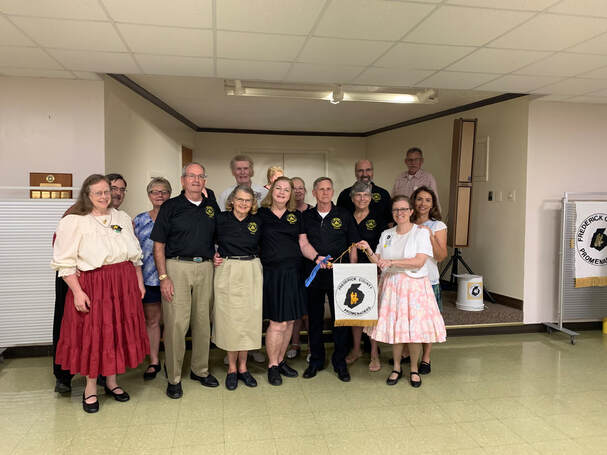 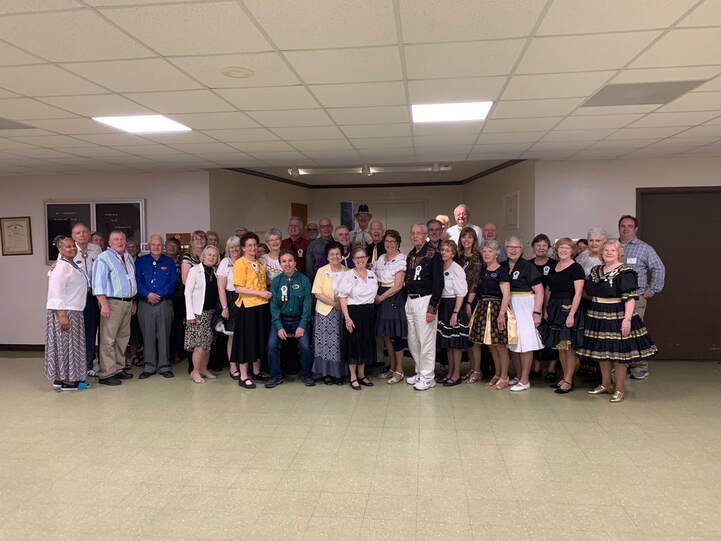 ​The Black and Gold was prominent at the Celebrate 31 Years dance on Friday May 17th. 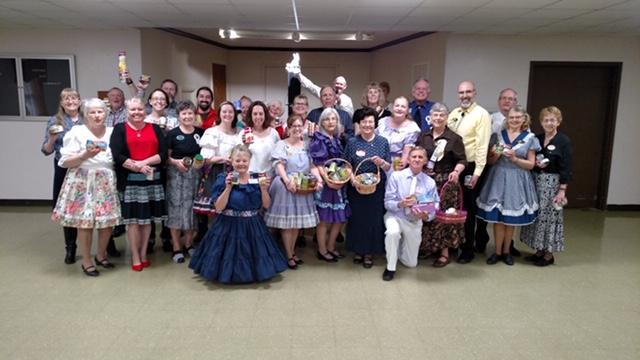 Filling the Easter baskets with food donations was the first priority at the Bunny Hop Dance on Sunday April 14th.  Pictured above are the club members and guests holding the filled to the brim baskets to be donated to a local food bank organization. 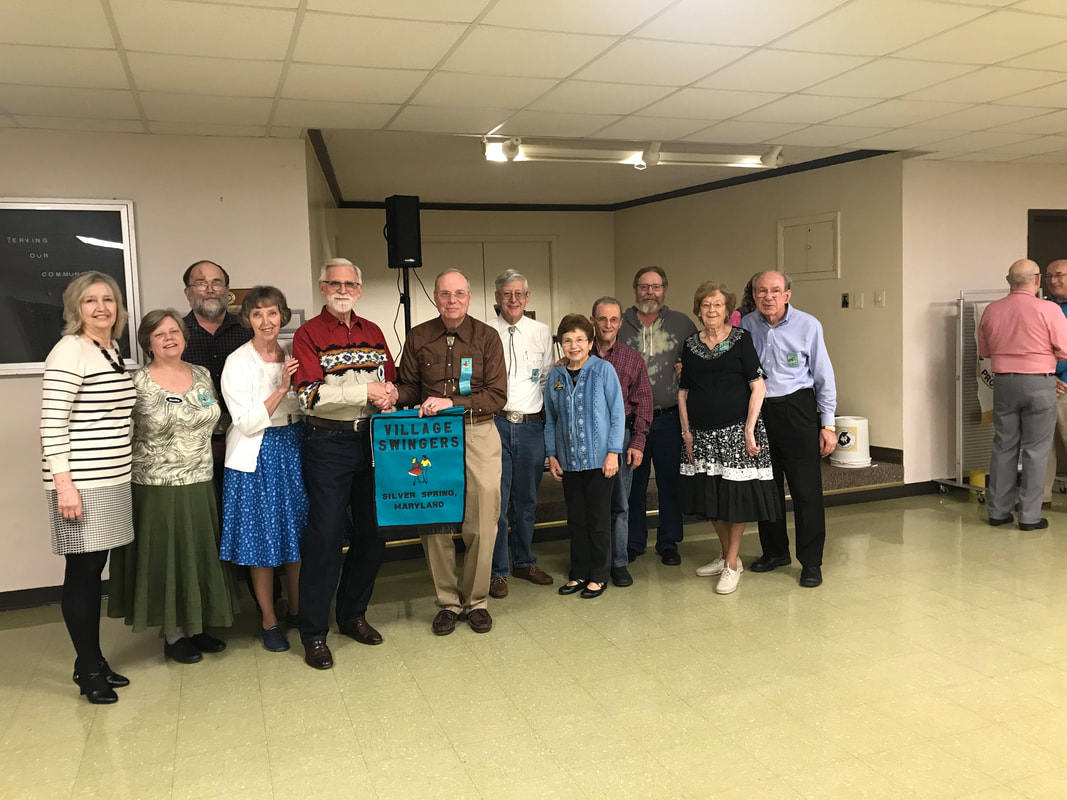 ​The display and selling of second hand square dance attire was prevalent during the April 5th Stop & Sell The Roses dance. The dance floor was crowded with six squares of club members and guest visitors.  Pictured above is FCP Club President Henry Lane with the guests from the Village Swingers club in Rockville, MD.

3/22 march to the dance hall DANCE

Seven squares of marchers attended the belated St. Patrick's Day themed March To The Dance Hall Dance on Friday March 22nd.  Included in the mix was a contingent of Felonious Four County Squares with the devious purpose of stealing our beloved banner.  Pictured on the left is the dancers in their themed green.  Pictured on the right is the aforementioned nefarious looters taking the banner from a bewildered Club President Henry Lane.  I am pretty sure that a recapture the banner raid is in the astute planning phase of General Henry. 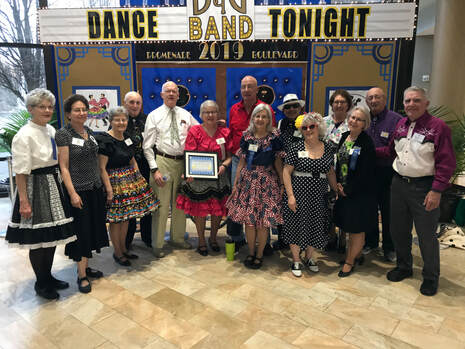 On March 15th Promenaders Jan & Alex Dommerich were recognized for their volunteer work for the WASCA festival.  The picture above shows members of the club with Jan & Alex displaying their Dancer  Appreciation Certificate. 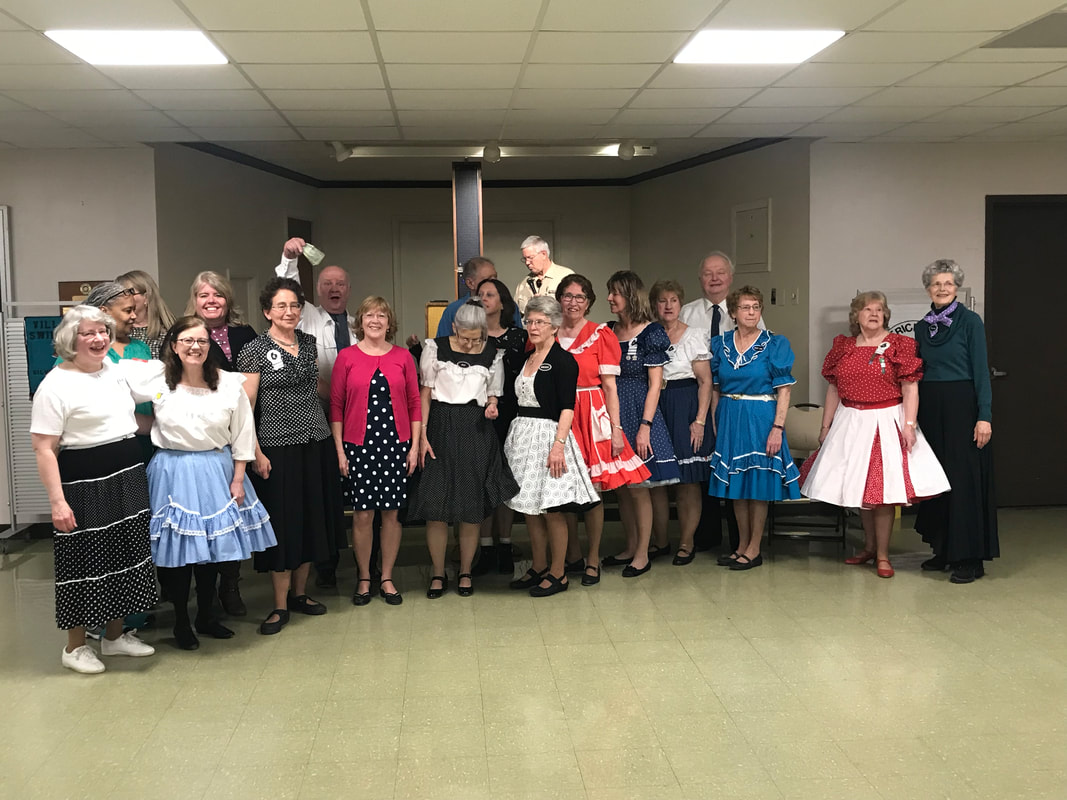 ​Club members, students, and visitors wearing the dots at the Polkas & Polka Dots dance on 3/1/2019. 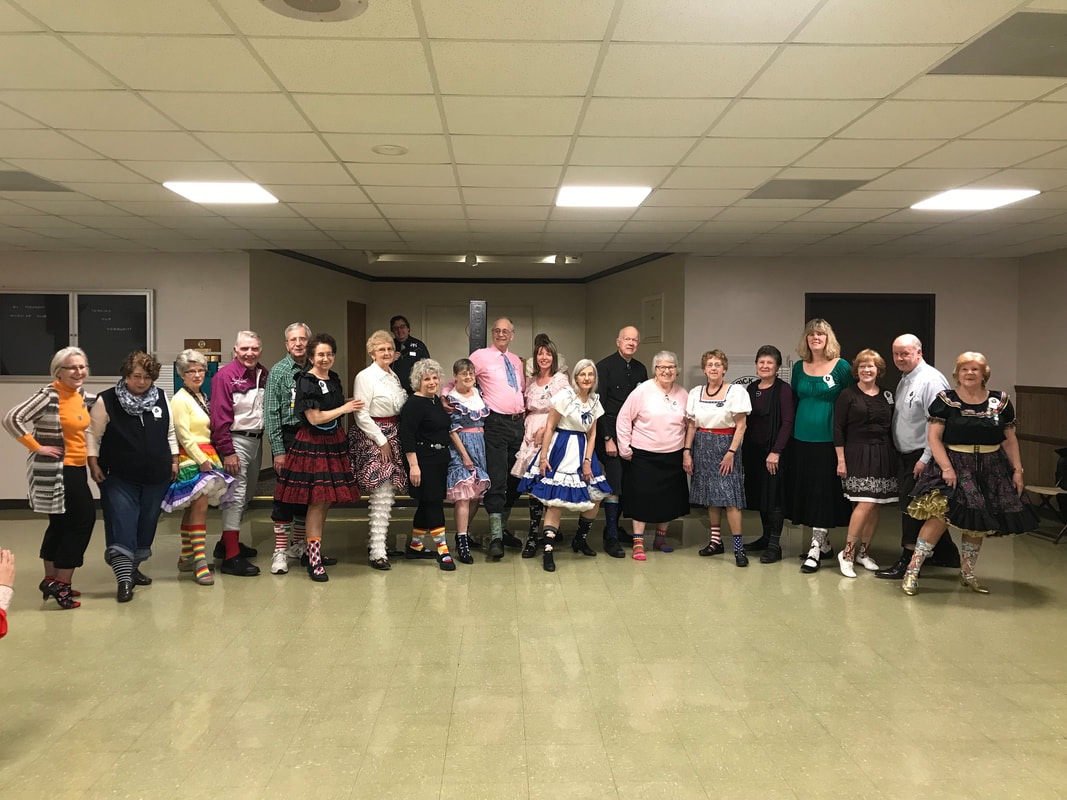 ​It was as crazy as you can get, that is from the knees down, at the Crazy Socks dance on January 18th.  Pictured above is the cast of characters and their crazy socks.

On Monday January 7th one square of the Gad-Abouts attended and performed in exhibition and competition at the Pennsylvania Farm Show in Harrisburg.  Pictured on the above left is the square waiting to enter the Parade of Squares at the beginning of the show.  The above right photo is the square assembling in their designated spot 47.  The Promenaders attendees were Marjorie Barber and Dan Grimes. Two videos are in the Video Gallery.

​The holiday season was kicked off in a rousing and tasty way at the Christmas Pot Luck Dinner Dance on Friday December 7th at the FCP club dance.  Food and holiday cheers were abundant as five of the dance class students (on right) joined regular club members and guest visitors to the seasonal singing calls of Club Caller Doren McBroom. 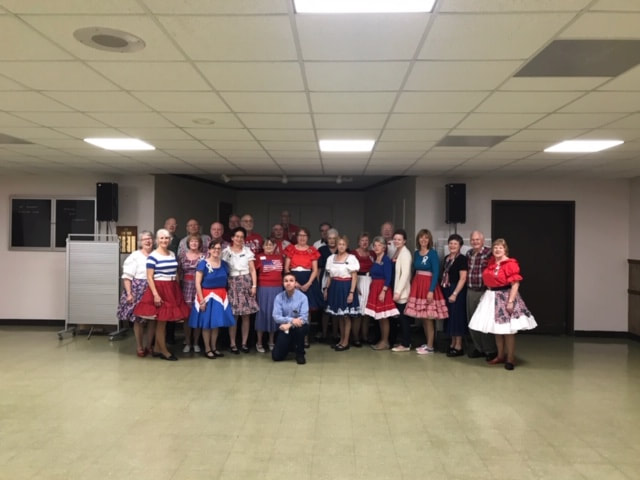 Patriotic colors are plentiful at the 11/2/18 Thankful For Veterans Dance. 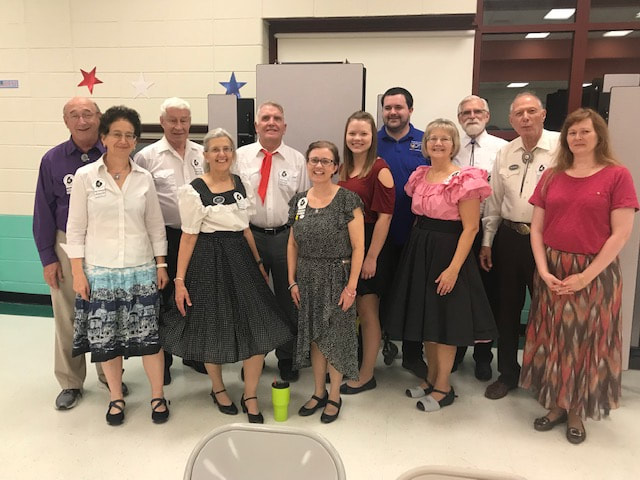 ​On Friday October 19th, twelve Promenaders, led by Club President Henry Lane, went "On The Road Again", ​eastbound on Route I-70, to the Tom Thumbs square dance in Ellicott City. It was the front end of a home and home trip.  The Tom Thumbs will visit the Promenaders home turf in May 2019.

It was Spooky Sunday in Walkersville on 10/14 as the Promenaders hosted the Spooky Disco Ball dance.  Pictured above from left to right are Robert Abdinoor as the Mad Monk, Club Caller Bruce Simpers as the Templar Knight, and Mary Tucker as a Roaring 20's Flapper Girl with Marjorie Barber as the Bumble Bee or a Retro Pittsburgh Steeler. 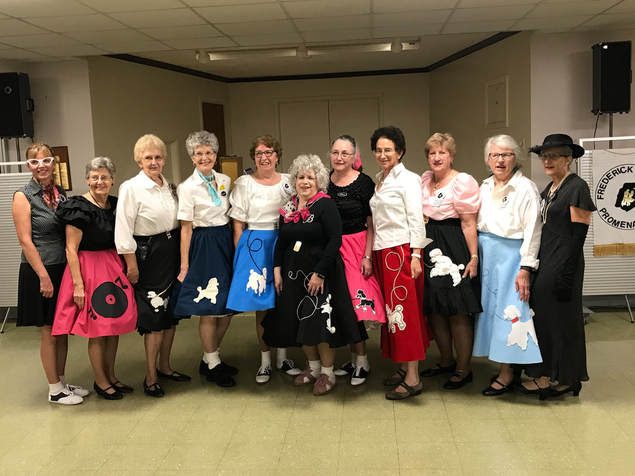 On October 5th, the FCP Square Dance Club went back to the Fabulous 50's when poodle skirts were in vogue and Elvis was the King.  Mike McIntyre was the Guest Caller.  The picture is the FCP Poodle Skirt Brigade in full regalia. An associated video is in the Video Gallery.

The last 2018 Summer Sizzle dance featured a celebration of the 50th wedding anniversary of Jan and Alex Dommerich (pictured on the left).  Happy Anniversary Jan & Alex! The entire dancing crew is pictured on the right. 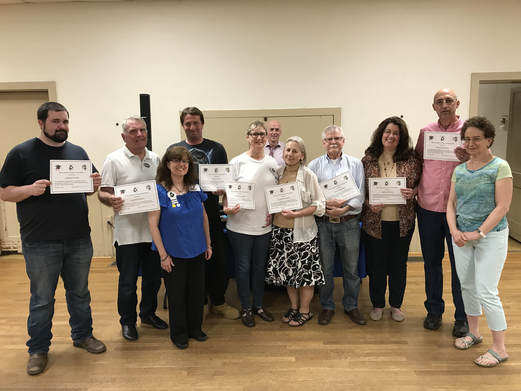 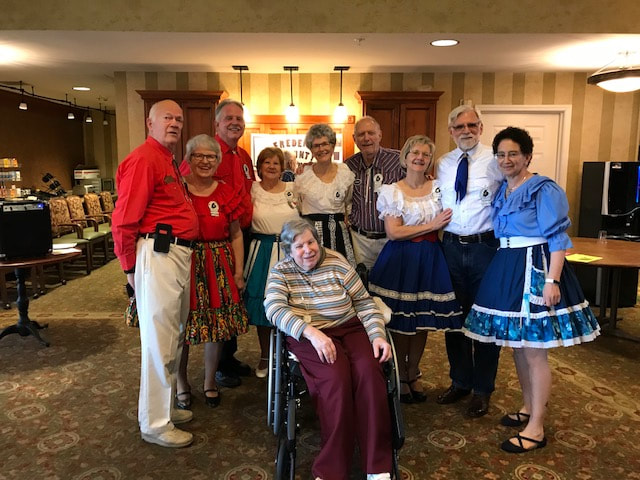 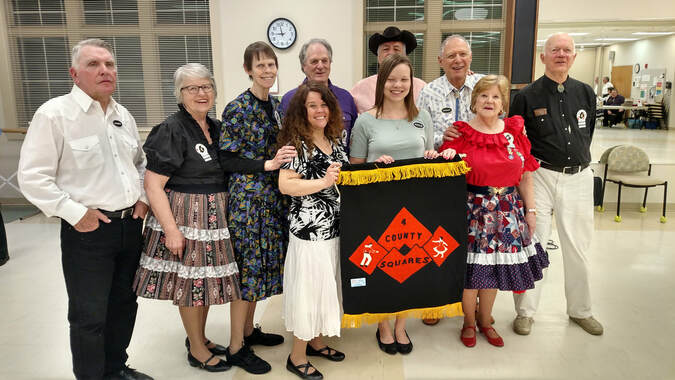 Above are 6 selected pictures from the Pirates on Parade dance from April 20th.

​P.S. Did anybody tell Scallywag Dan Grimes that he wore the wrong Pirate outfit.  Maybe he thought it was the Sports Night dance?  He should have walked the plank for that one.

​On February 21st, members of the Promenaders went on a road trip to the Lovettesville Elementary School Aftercare center.  During the demo the students were asked to participate.  The picture on the left shows a student fixing a shoelace technical glitch before the "Show Could Go On". 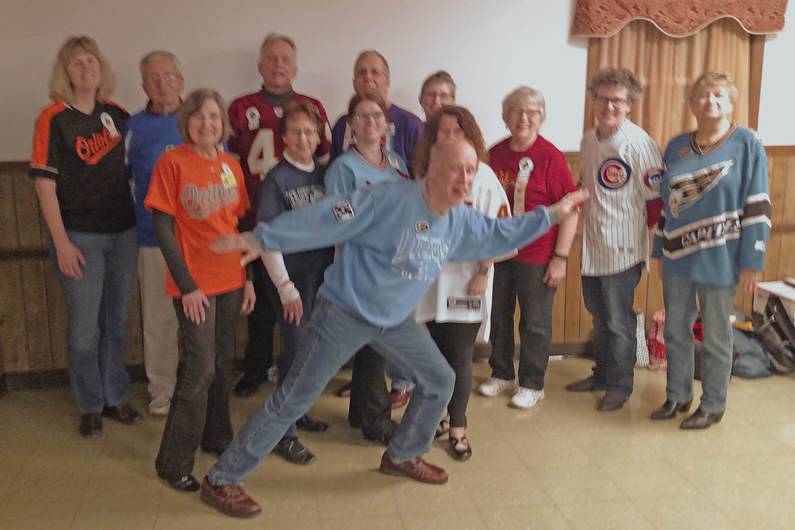 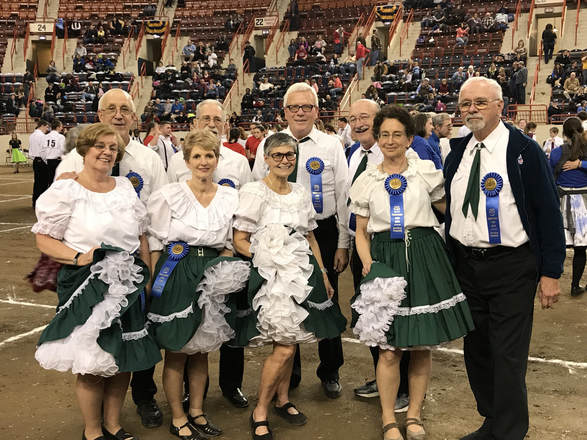 On January 8th, FCP Club Members Marjorie Barber and Dan Grimes, who are also members of the Gad-Abouts, were part of the Gad-Abouts Square Dance Clubs contingent that performed in square dance exhibition and competition at the Pennsylvania Farm Show in Harrisburg.  A total of 60 squares participated in the event.  The picture shows the Gad-Abouts members displaying their Superior Performance Blue Ribbons!

Members of the Promenaders Square Dance Club pose at the Salute To The Veterans Dance on November 3rd, 2017.  The photo on the right contains the Veterans who attended the dance.  We all thank them for their service to our country!